Mercury Falling is a fanciful interpretation of the last night in the life of Parisian sculptor Jean-Louis Brian (1805-1864). In the winter of early 1864, Brian attempted to protect his clay statue of Mercury in Repose from the bitter cold by covering it with his only blankets – and subsequently froze to death beside it. Mercury Falling depicts Brian’s feverish attempts to finish his sculpture for the impending Salon exhibition. As the temperature drops and he succumbs to hypothermic hallucinations, he is lured into a fantasy world in which the god Mercury comes to life.

Incorporating themes of the artist’s struggle for meaning, recognition and even survival,Mercury Falling is a monologue that shifts between reality and an allegorical fantasy world. The vocalist portrays the artist through vignettes of music and text (both sung and spoken) in free-association. Accompanying him on stage is a dancer/model portraying the life-sized Mercury. The chamber ensemble alternately evokes the freezing, desperate climate of the artist’s studio and his increasingly grandiose expectations for his work of art. 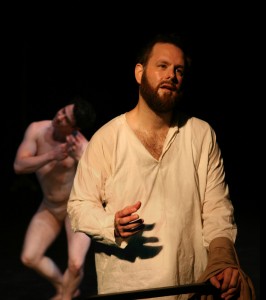