Mercury Falling, an innovative monodrama for tenor, dancer, and chamber ensemble, is a fanciful interpretation of the last night in the life of Parisian sculptor Jean-Louis Brian (1805-1864). 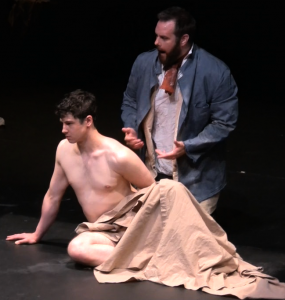 In the winter of 1864, Brian attempted to protect his clay statue of “Mercury in Repose” from the bitter cold by covering it with his only blankets, and subsequently froze to death beside it. Mercury Falling depicts Brian’s feverish attempts to finish his legendary sculpture for the impending Salon exhibition. As the temperature drops and he succumbs to hypothermic hallucinations, he is lured into a fantasy world in which the god Mercury comes to life. Incorporating themes of the artist’s struggle for meaning, recognition and even survival, Mercury Falling is a contemporary monologue that shifts between reality and an allegorical fantasy world.

The singer portrays Jean-Louis Brian through vignettes of music and text in free-association, accompanied in a theatrical staging by a dancer portraying Mercury. The orchestration alternately evokes the freezing, desperate climate of the artist’s studio and Brian’s increasingly grandiose expectations for his work of art.

Mercury Falling uniquely combines elements of opera, theater and dance in an interdisciplinary venture that is both compact and versatile. With flexible production values and innovative staging, it fits naturally in a variety of traditional theater spaces—proscenium, thrust or arena— and easily adapts to non-traditional settings, working effectively in museums, black box theaters, art/performance studios and exhibition spaces. Musically, there is great utility in the choice of either chamber orchestra or a piano four-hands accompaniment, providing versatility and also a practical option for production scenarios with fiscal limitations. The dance component is also malleable; as it allows for utilizing a local dancer and choreographer to bridge the production with a specific dance company, conservatory or university program. Mercury Falling stands alone as equally suitable for opera, theater or dance companies, in addition to chamber music and art museum special event programming. 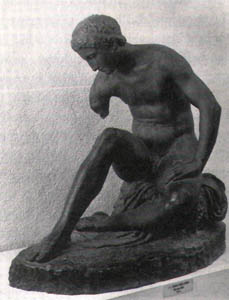 “The only work exhibited at any of the Salons that Rodin ever singled out for praise was Jean-Louis Brian’s Mercury. This statue won a Medal of Honor at the Salon of 1864. Rodin called it ‘one of the finest things in the world… Such force and beauty!’ The figure is a simple male nude at rest, in a conservative classical mode. Part of Rodin’s enthusiasm was an empathetic response to the story known by almost everyone in Paris: Brian had frozen to death in his unheated studio, having wrapped Mercury with the blankets from his bed so that it would not freeze and break apart.”